The word itself is used for the process when you remake products out of waste. The main goal of recycling is to spare the remaining natural energy sources like trees. There's us need to cut them down, or mine iron stone for car production. And the another goal is to reduce the amount of waste in the world.

There are certain laws within the European Union to regulate. The use of recycled waste, reduce their harmful effects on humans.

The domestic waste management has also taken some action. It has proposed a special program, which contains some special criteria about recycling. This document has been accepted by the government.

We try to put emphasis on the innovative technology and to cut down on the amount of waste. The document also says that.

The HKI regulation up to 2020 the use of recycled materials (papers, plastic, wood, grass) Should be increased by 50% , and the constructional/ demolition waste should be increased by 70% until 2015 a separated waste-collecting system has to be set up to reduce the waste by 35%

There is a so called „waste hierarchy” and it can be followed in 5 steps:

The UNESCO puts much emphasis on how to learn to improve to be aware of environmental protection. The new regulations in 2012 have focused on the protection of our fields , forests , native plants and species not only for the present but for the next generation .

The organizers have also established:

In this campaign there are 512 Eco schools and 111 „green” day-cares involved, where the kids have to learn how to recycle and who it is so important.

In Hungary only 17% of the population collect rubbish selectively. Just to make things better, selective bins have been placed outside the houses. Although it seems to be very useful, the delivery expenses have increased.

In Hungary metal containing wastes are the most important wastes from batteries and electronic waste, which contain silver, gold, iron and aluminium and other „critical elements”

How to reuse it: paper tubes, kitchen aluminium fail, or even lamps can be made from recycled paper. Making paper from cartons. In this process the paper fiber plays an important role.

Rubber is recycled 100%. It has to be recycled 100% according to recent laws, which take this issue very seriously.

Facts about recycling in Hungary

This is not a highlighted topic but we can be really proud of the recycling in Hungary.
There are about 100 companies which deal with the reuse of waste materials such as paper, metal, plastic, glass, tyres, electronics, etc.
We have a couple of special products which are worth mentioning such as the furniture family made of recycled cardboard. This is a worldwide patented Hungarian product range.
The fans of the ventilation system of the new underground route in London are also produced and delivered by Hungary. The speciality of these fans is that their blades are made of recycled beverage cans.
Most of products are made of recycled plastic - e.g. garden benches, fences - but the piers can be also built from 100% recycled materials.

Rebar. Which is indispensable for building industry.

Cleaned cullet, made from glass

After collecting them all, they are weighed and recycled

An issue about the plan of the renewable energy using of Hungary has just been released. According to the regulation of the EU, Hungary must cover 13% of the energy consumption with renewable energy within 2020. In this plan the main goal is at least 14,65%

In Hungary the wind energy cannot be use as much as other countries. Because the wind depends on the weather, so it is not fix. It means that the wind turbines can produce periodically, but in the electricity system needed permanent producing-consuming rate.

The other problem is the obtainable power: in Hungary the intensity of the blow of the wind is not enough to gain the ideal amount of energy from the turbines.

The solar energy system is not built up yet, but in the future it could be a potential electricity producing and heating system.

The situation is the same with the wind energy and the hydro energy. The water flows of our rivers are great, but their fall is not enough to gain ideal amount of energy.

The geothermal energy is concerned as natural resources of Hungary (In other counties the average 3-4 C/100 m, but in Hungary it is 5-7 C/100m). The consumed energy will be tripled till 2020 mostly for heating. (Heating of buildings, warming water, etc.). A separate development program will serve the renovating of the bathes, that will help the growing of tourism. A part of the warm water of the depths of the Earth will be used for heating, in the agriculture and in the thermal bathes, on the other side for electricity production. But the last one is limited: at least 8 cubic meter 120 C degree water needed/ minute. Hungary is very rich in mineral waters and natural spa waters, that could be the key in the future of the eco-friendly energy producing.

A Hungarian girl developed an environmentally friendly design bed that can help the homeless peoples. The terMINI is a complex bed. Its size in rolled up form is like a bag, and it can be build up with zipper and Velcro straps. It can be fast built and pack up and it is heat-retaining, waterproof and padded. Laczkó Juli spent 40 minutes in the terMINI and she told: outside was cold and snow, but inside it was warm enough not to wear a coat. The girls name is one with the recycled nylon material that she developed and called UTOPLAST. From that she produces bags with the name, Plastenka. 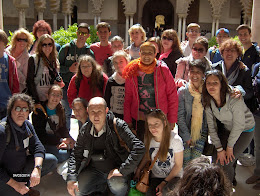 Polish students' memories from the visit in Germany

"I have just got back from the meeting in Germany. Me and my 5 Polish friends spent a wonderful week there. I’m extremely lucky to have had a chance to visit so many beautiful and interesting places like Hohenzollern castle and Mercedes Benz museum or to spend time and do some shopping in German cities: Frankfurt and Stuttgart. But in my opinion the best part of Comenius is meeting new friends from all around Europe. I also spent time with students who were in Poland – especially Basak, who stayed in my house during her visit. All Comenius people did many things together like bowling or watching a football match. That’s why it was so sad to say “goodbye” on the last day.
Thank you Jessi for being such a good host friend and thank you everyone for the time we spent together! I hope we will meet again one day."

"First of all, I would like to say THANK YOU to all the people from Germany and other countries for making this week one of the best in my life. This visit was awesome and I will never forget it. Germany is a wonderful state. I will miss my host friend and the others. After this visit I have the best memories and photos. I hope that we will meet in the future."

"It was big pleasure to me to visit Germany. It is a very nice country with many beautiful views. People who live here are very nice and they can have great fun. They are freak about football and everything that is connected with their national team. I have great memories connected with my host family especially about Jonas who is a cheerful person. It was very nice to find out something new about another culture. This visit helped me a lot with my English. I think that there were some mistakes connected with the organization but it wasn't very serious, only sometimes it was confusing. I think that it was great integration and I would like to go back to Germany in future."

"During my stay in Kirchheim I refreshed the knowledge on economy gained in Poland. I met many new and wonderful people with whom I'll probably keep in touch for many years. I learned a lot about our western neighbours’ habits, and I saw with my own eyes how to celebrate the victory of their football team. I also had the opportunity to taste traditional dishes of the country (for example Spetzle, or hand-made noodles). Despite some inaccuracies I had a great time during the exchange. The trip to Germany was an amazing experience that I would like to repeat in the near future."

"I’m very happy that I could go to Germany. This time was really fantastic. Thanks to Comenius Project I met a lot of friendly, cheerful and nice students. I'd like to thank all the people who were in Germany and my host family. In this country I improved my English language skills. I also visited many interesting places such as Frankfurt am Main, Esslingen or Stuttgart. This week was one of the best in my life. I will miss everyone and I will always remember you. Thank you for everything."

A big THANK YOU to Germany

On behalf of myself and all the teachers and students participating in the visit in Germany, I would like to thank you very much for organizing this Comenius exchange. We all had an opportunity to learn more about your country, compare economic facts, share ideas on how to deal with the crisis and have a good time.Special thanks to the host families for making the guest students feel comfortable.

1)    Reforming the organization of the territory: Suppressing all the “départements” to avoid the administrative layer cake. /Joining together the regions (21 to 14) to save money at the national level.

2)    Reducing health costs: Some medicines will now be paid for by patients and not by social security. People will spend less time in hospital.

4)    Some people can have a reduction in their income tax if they buy a flat for rent or hire a charwoman: these advantages will be suppressed.

5)    The companies which make a commitment to hire more workers or invest in research will see their taxes reduced.

6)    So- called responsibility pact: reduction of the social contributions (taxes paid by companies and workers on the salaries and used for financing the social security system) to foster job creation.

7)    Different types of job contracts supposed to improve job creation: contracts matching the hiring of a young worker with an older one to permit skill transfer.

9)    Blocking the salaries of civil servants.

10)  Reducing by 50 % the subventions to cultural projects

Opening meeting in Poland: Steps Towards Democracy and Social Rights.

Meeting in Portugal: Steps Towards a European Cultural Identity.

Meeting in Spain: Steps Towards Reducing, Reusing and Recycling.

Meeting in Germany : Steps Towards a Solidarious European Economy.

Meeting in Greece: Steps Towards Safer and Healthier European Citizens.

Meeting in Slovakia: Steps Towards a Europe Without Borders.

Meeting in Hungary: A Leap Towards Active European Citizenship.